At Bacon County Hospital and Health System, we are committed to you receiving high quality health care, close to home! 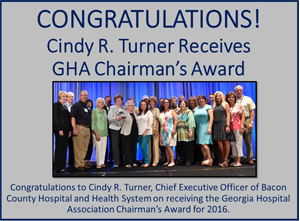 The Bacon County Hospital and Health System has a long history of determined, self-sufficient and innovative service.

We are very proud of the excellent healthcare that has been delivered by the Bacon County Hospital and Health System day after day and year after year. We look forward to caring for the community and being a part of economic growth in the future.

The financially successful Health System is comprised of the Bacon County Hospital and Health System (25-bed Critical Access Hospital), Twin Oaks Convalescent Center (88 beds), ABC Child Development Center (average daily census, 153 children) and Community Care Center. The System (including the nursing home) has been Joint Commission accredited since 1995. The CEO has years of experience in hospital administration and has been with the System since 1981.

In 2006, the citizens of Bacon County voted to pass a SPLOST referendum that included $1 million for expanding and modernizing the current facility. On June 17, 2008, A Ground Breaking Ceremony began the long awaited dream of a three phase project beginning with a new Second Story Patient Care Area. Construction began in July of 2008 on our healthcare system, which would enhance both patient care, as well as comfort.

Phase one of the new story consisted of 25 beds with all private patient rooms; a 4-bed postpartum unit, 13 patient rooms, 4 critical care ICU rooms, and 4 step-down rooms. The second floor also includes a 4-bed nursery, an in-patient waiting area, and an ICU waiting area. This phase was completed in May of 2009.

Phase two began the renovations to accommodate and to update Diagnostic Imaging and to include renovations to the Laboratory Department and the 14-bed observation unit. In February of 2008, Diagnostic Imaging went to Digital Mammography. The hospital opened up a MRI unit with 64-slice Toshiba technology in July of 2009 and a Nuclear Medicine unit in October of 2009. Upon receiving a grant for $985,000.00, we upgraded our CT to 160-slice Toshiba technology in February of 2011, making our radiology department rated among the most advanced in the state. The Ribbon Cutting Ceremony for the completions of Phases one & two were held on May 19, 2009.

Our CT Scanner has now been upgraded to a Toshiba Aquillion 640 slice CT. We are one of only 5 hospitals in the state with this technology. This allows us to provide a faster, more accurate scan at a lower radiation dose.
With our CT Scanner we can offer all CT, CTA, Cardiac (with 3D Reconstructions) and Calcium Score exams. We have a Toshiba Titan 1.5 Tesla MRI that offers all MRI/MRA exams including 3D reconstruction. We can perform all MRA studies without IV contrast because of the advanced software that we have which allows visualization of the vessels without the need for contrast. We also have the Metal Reduction Software that allows us to acquire diagnostic images with someone that has hardware. The MRI scanner has a wide bore which has an opening of 71cm , it also allows us to be able to scan feet first if needed and music to help with patient comfort.

Alma, a Your Hometown community of 3,000, is a safe and friendly community. Alma is 110 miles from Savannah, 70 miles from Brunswick and the Golden Isles, 110 miles from Jacksonville, 24 miles from Douglas and 26 miles from Waycross. Bacon County Airport has a 5,000-foot runway with 24-hour self-serve fuel, hangars, courtesy car and lighted runway.

Bacon County (11,000 pop.) offers excellent Primary, Elementary, Middle and High Schools. Also within Bacon County is a local satellite office for Okefenokee Technical College. South Georgia College in Douglas and Waycross College in Waycross are both two-year colleges of the University of Georgia System. There are two private schools (Pre-K to 12) in Waycross, one in Douglas and one in Baxley.

Recreational opportunities are varied and many. The 18-hole Blueberry Plantation Golf Course has a driving range, putting green, clubhouse, and swimming pool. In addition, many housing sites are available around the course. Goldwasser Park in downtown Alma is host to annual events such as the Blueberry Festival, Day of the Child, the annual Lighting of the Christmas tree, the Fall Festival and many other civic events. The historic Bacon Theater is a community venue for the Bacon Little Theater group and the high school theater group. A 117-acre recreational park includes 5 competition-ready softball/baseball fields for youth and adults, a picnic area, children's play area, tennis courts, and nature trail. A dirt bike motocross course has been recently completed, and the Bacon Saddle Club is well established.

There are two major day-care facilities in the county. Religious denominations include Baptist, Methodist, and Church of God. Episcopal, Catholic, and Presbyterian churches are located nearby in Waycross and Douglas.