At Bacon County Hospital and Health System, we are committed to you receiving high quality health care, close to home! 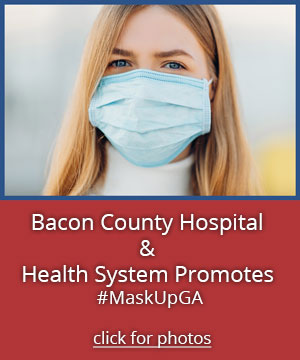 Bacon County was created in 1914 from parts of Appling, Pierce, and Ware counties. This county was named for Senator Augustus O. Bacon, who was a four-term U.S. Senator.

Alma, Georgia is the only incorporated municipality in Bacon County. Alma's name is an acronym composed from the first letters in the names of Georgia's four state capitals: Augusta, Louisville, Milledgeville, and Atlanta. Alma and Bacon County have numerous areas for swimming, picnicking, hiking, and other recreational activities. The city itself owns four parks, and citizens also have access to six facilites that are privately owned.

The community has supported the health system tremendously over the years. As an example, in 2002, the system began a $2.5 million dollar building project. A new Emergency Department and expansion and renovation of the obstetrical and surgery suites was completed in February 2004. This effort was supported by the people of Bacon County with the passing of a one-cent special purpose local option sales tax. In addition, the health system has been identified by the Alma-Bacon County Chamber of Commerce as one of the top five strengths of the community. We are very proud of the excellent healthcare that has been delivered by the Bacon County Health System day after day and year after year. We look forward to caring for the community and being a part of economic growth in the future.

A Little More About Our Community

Alma, a Better Hometown community of 5,000, is a safe and friendly community. Alma is 110 miles from Savannah, 70 miles from Brunswick and the Golden Isles, 110 miles from Jacksonville, 24 miles from Douglas and 26 miles from Waycross. Bacon County Airport has a 5,000-foot runway with 24-hour self-serve fuel, hangars, courtesy car and lighted runway. Bacon County (11,000 pop.) offers excellent Primary, Elementary, Middle and High Schools. Also within Bacon County is a local satellite office for Okefenokee Technical College. South Georgia College in Douglas and Waycross College in Waycross are both two-year colleges of the University of Georgia System. There are two private schools (Pre-K to 12) in Waycross, one in Douglas and one in Baxley. Recreational opportunities are varied and many. The 18-hole Blueberry Plantation Golf Course has a driving range, putting green, clubhouse, and swimming pool. In addition, many housing sites are available around the course. Goldwasser Park in downtown Alma is host to annual events such as the Blueberry Festival, Day of the Child, the annual Lighting of the Christmas tree, the Fall Festival and many other civic events. The historic Bacon Theater is a community venue for the Bacon Little Theater group and the high school theater group. A 117-acre recreational park includes 5 competition-ready softball/baseball fields for youth and adults, a picnic area, children's play area, tennis courts and nature trail. A dirt bike motocross course has been recently completed, and the Bacon Saddle Club is well established. There are a number of clubs and civic organizations represented in Bacon County: AARP, Alma Exchange Club, Alma Grandmothers Club, Alma Lions Club, American Legion, Bacon County Young Farmers, Progressive Men's Club, Retired Teachers Association, 60 & Over Group, VFW, and Good Samaritans. There are two major day-care facilities in the county. Religious denominations include Baptist, Methodist and Church of God. Episcopal, Catholic and Presbyterian churches are located nearby in Waycross and Douglas.

To learn more about our community we have provided the below links for your exploration: